Absolute Enchantment at the Alhambra

In my life, I have experienced a few travel moments so spellbinding, so breathtaking, so fascinating, that they have left me short of breath.

They’re not common.  After visiting 28 countries, I can think of only about five instances that have affected me so deeply.  And one of those was visiting the Alhambra in Granada.

The Alhambra was built during the mid-14th century as a palace for the Moorish princes.  After the Moors were driven out of Spain in 1492, the Christians continued to use it as a palace.  Washington Irving lived in the Alhambra and wrote about it in the 19th century, and it later became a UNESCO World Heritage site.

I started with a walk through the grounds.

On the walk in, you see the area that used to house markets, shops, and homes.  These places have since been destroyed.  It reminded me of Angkor Wat, where the only remaining structures are the ones that were built to stand for centuries.

Your ticket will likely direct you to begin your visit at the Palacio Nazaries, or the Nasrid Palaces — the most spectacular buildings of all.  These are the buildings that hosted Granadan royalty.

The Palacios Nazaries are a series of rooms, courtyards, and hallways, each decorated beautifully.  It seems like every surface is carved as intricately as possible.

The ceilings were especially striking.

Take a look at one of the walls close-up:

And it kept getting better and better.  Many of the rooms had windows overlooking all of Granada.

This is where it started happening.  I would turn a corner and SIGH, quite loudly, with happiness.  The Alhambra was just that beautiful.

I do wish that I could convey it better, but you’ll have to trust me on this — nothing compares to seeing the Alhambra in person.

Even the rooms hidden away from site — like the servants’ quarters — were filled with beauty.

No detail is too small for the Alhambra.  I loved the little touches, like the cubbyholes in every room, each of them as intricately carved as the surrounding walls and columns.

And the most beautiful part?  The courtyard with the pool.

BLISS.  Pure, absolute bliss.  This building could not be more beautiful.

Across from the Palaces is the Alcazaba.  It’s mostly interesting for its military history, and in terms of beauty, it doesn’t even come close to the Palaces. 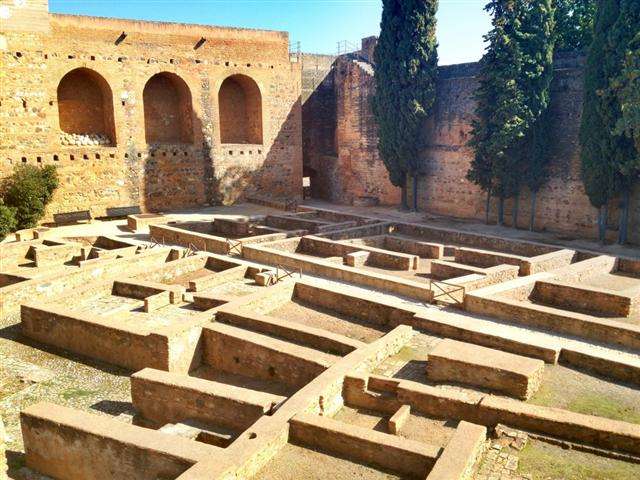 BUT — the Alcazaba is where you’ll get the best view of Granada.

Climb to the tallest tower and this is the view:

The finale to visiting the Alhambra is the Generalife — or the Generalissimo, as I called it throughout my visit.  This was the vacation and leisure home of Granada’s royalty.

The Generalife is the perfect place to end your visit — you can wander the gardens at a leisurely pace, or sit on a bench and take in the late afternoon views over the Alhambra and the city.  After experiencing so much beauty, it’s nice to get that chance to reflect.

From there, it’s a final walk through the gardens that leads you to the Alhambra’s exit.

Tips for Visiting the Alhamabra

This is one of my absolute favorite travel experiences of recent memory.  If you’re planning a trip to southern Spain, you absolutely MUST include Granada and the Alhambra.